So I decided that this weekend would be a good time to do my endlinks and lateral links. I was hoping to finish those up on Friday and then tackle the steering rack on Saturday. Instead, I totally borked my car on Friday because I was trying to rush things and now I get the pleasure of an emergency drum-to-disc conversion.

Lemme lay it out for you, I put the car up on jack stands in the street since I have no off-street parking (mistake #1). I took both tires off (mistake #2). I replaced the endlinks, but after no amount of fighting could I get the lateral links out. So I said screw it for the day, when to put the tires back on, starting with the left, higher, tire (mistake #3). As I’m jacking up the car to put the tire on the weight shifts, the jack stands tip and the car goes pop.

Turns out the pop was my right rear drum brake smashing into the sidewalk. To make matters worse, I broke my jack and the car had shifted so that the right hub was over the sidewalk, meaning I couldn’t jack it up to get a tire on the right side.

After a few choice swear words, I got a spare tire on the left side, and had my wife drive the car forward a few feet with the knuckle digging into the sidewalk and pavement. When she hit the brakes to stop, brake fluid squirted out everywhere from the rear right, which is when I noticed that one of the pistons was stuck in the open position. I managed to get a 2nd spare on the right rear and pull it around to a parking lot behind my house owned by my landlords. Got my regular tires on and then just let it sit overnight while I stewed.

So, today was a trip to Harbor Freight for a new jack and some additional tools that I’d need for the drum-to-disc conversion. I’ve got 1 side almost completed, save for the e-brake assembly. Tomorrow will be the other side + bleeding the brakes.

First off, here’s a shot of my busted drum brake, notice the right piston stuck in the open position: 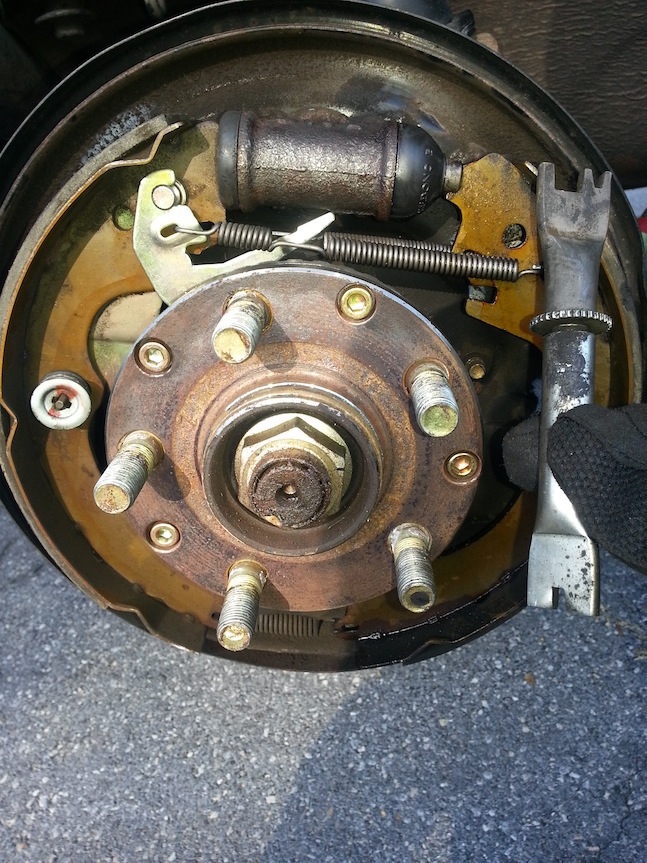 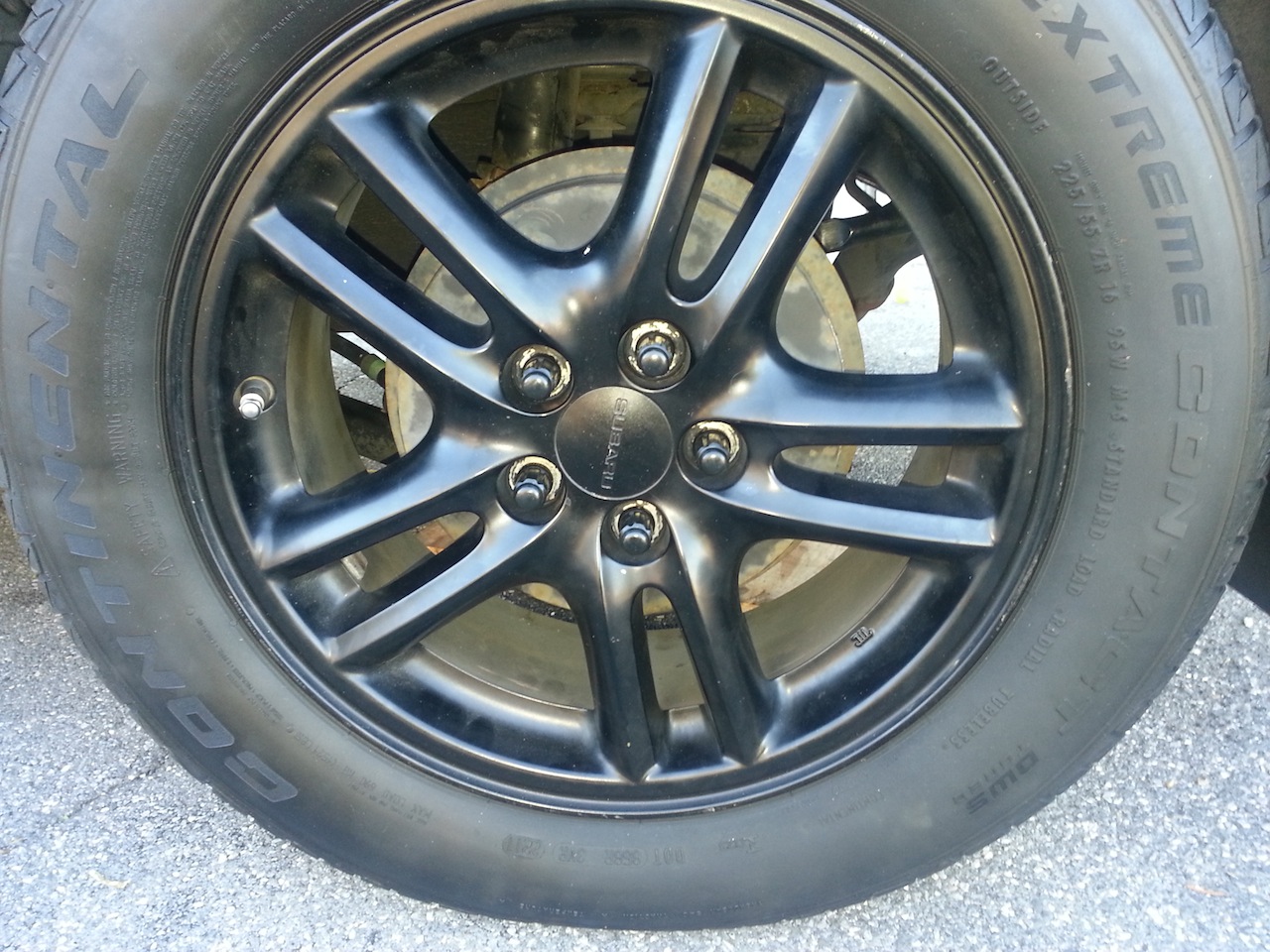 Here’s a shot of my (near) stock suspension, since in changing from drum to disc I also changed out my end links and lateral links 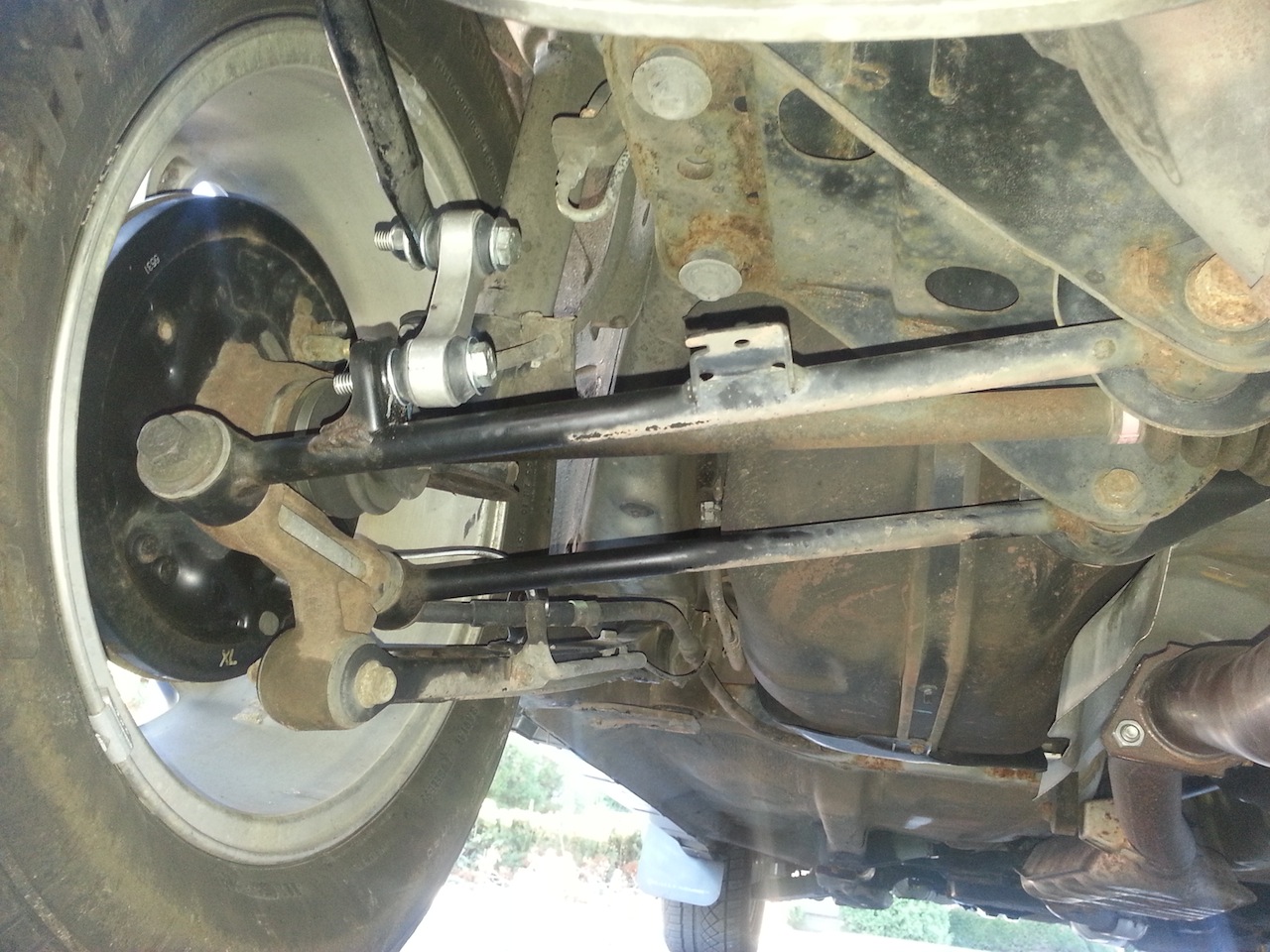 On to the swap!

General Note: I’m having fitment issues on my tires post-swap. Specifically, I’m running ’05 WRX wheels (16×6.5 w/ 55 offset) and I’m now getting rubbing on my strut from my Continental’s (225/55/16). It appears, from a rough measurement, that from the back of the dust plate to the base of the studs is about 5-6mm different between drum and disc. This was enough to cause some rubbing, but can be cured by either a) thinner tires, b) shallower offset, c) wheel spacer, or d) any combination of the above.

Overall Tools Needed:
Remove e-brake cable from interior: (Sorry no pics atm, I’ll try to go back and get them)
Tools Needed:
Note: I did this step last. It worked, but it was also a pain because a) I was dirty and got gunk all over my interior and b) pushing the e-brake cables ‘up’ from under the car was a pain that I think is more easily achieved by pushing the cables down from the interior.
Onto the fun stuff:
*** = Only necessary if replacing the lateral links, as I did
**** = Only necessary if the donor disc wheels have trailing arms or axles
Tools Needed:
Step-by-Step 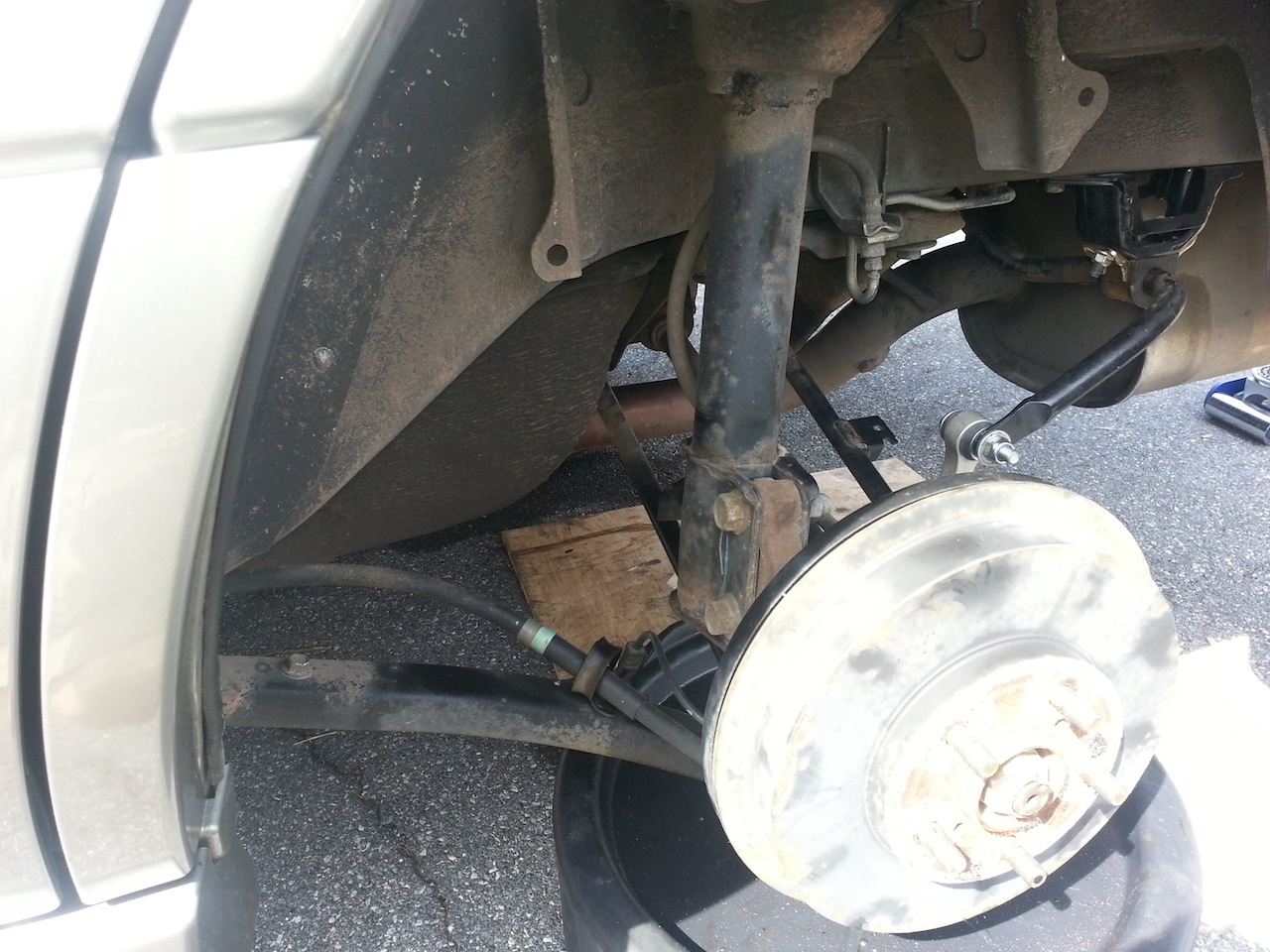 Alternative Note: If you do not have an axle to swap in, now would be a good time to have a friend stand on the brakes and, using a 32mm socket, knock loose the hub nut holding the hub to the axle 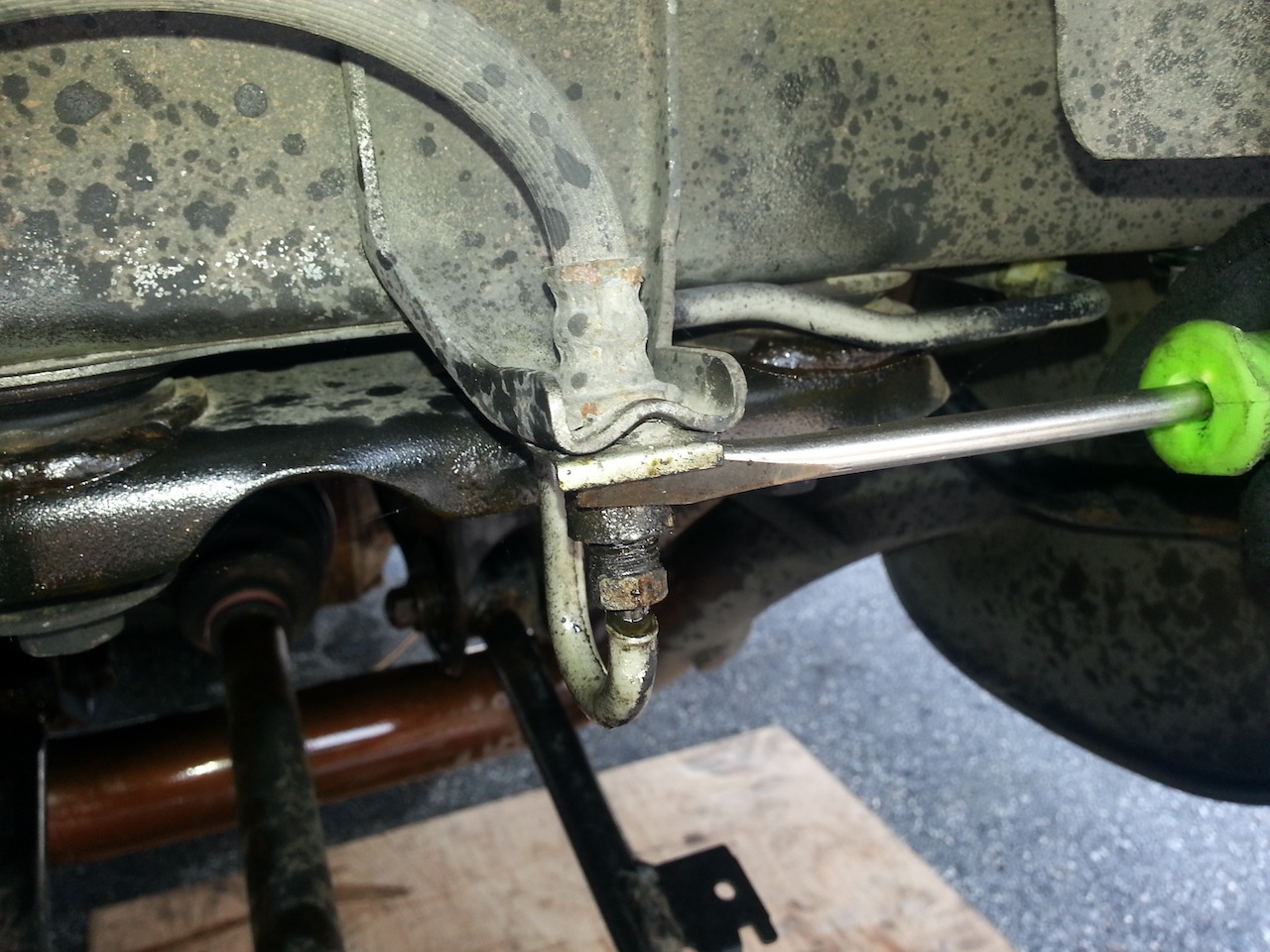 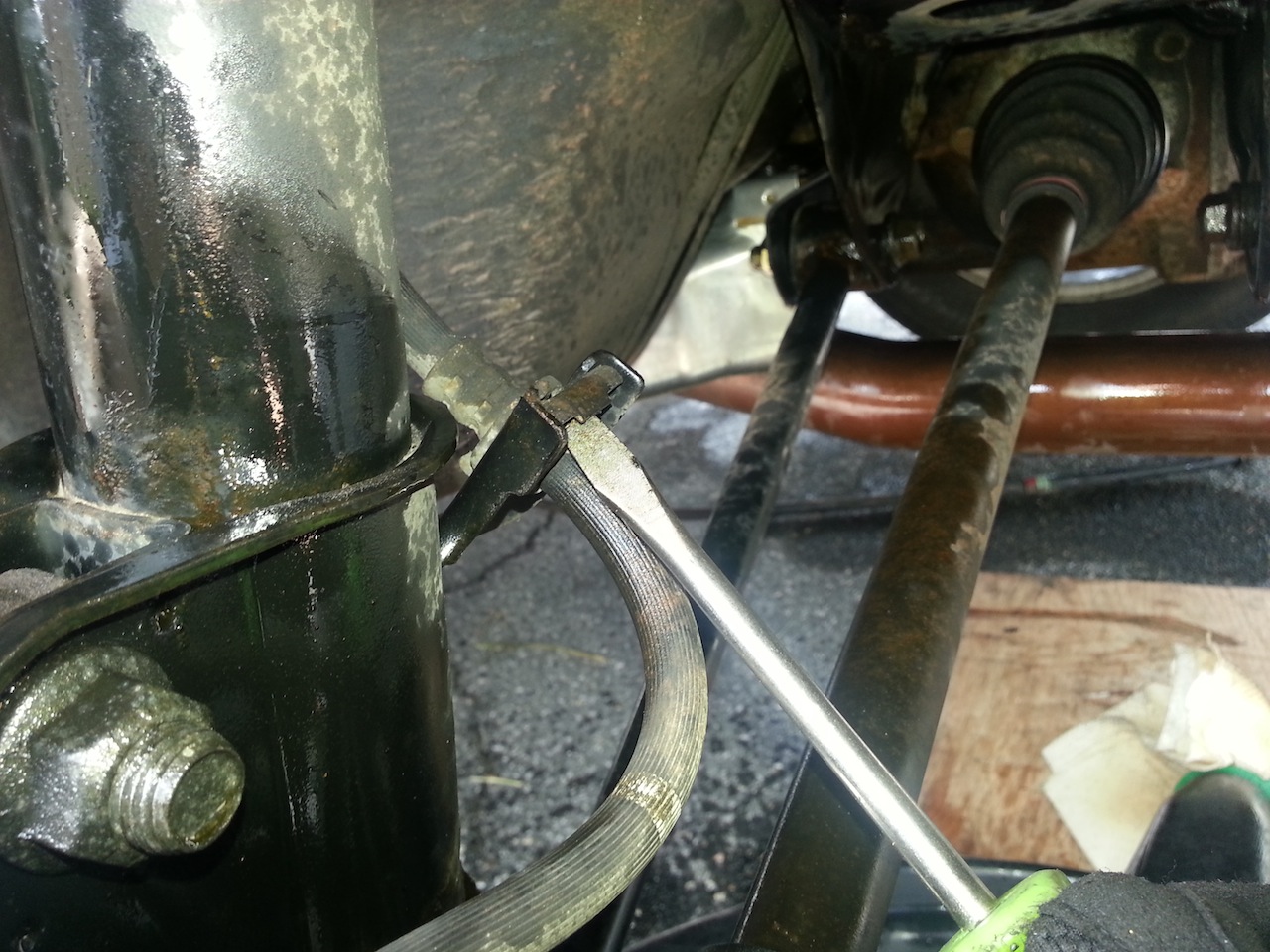 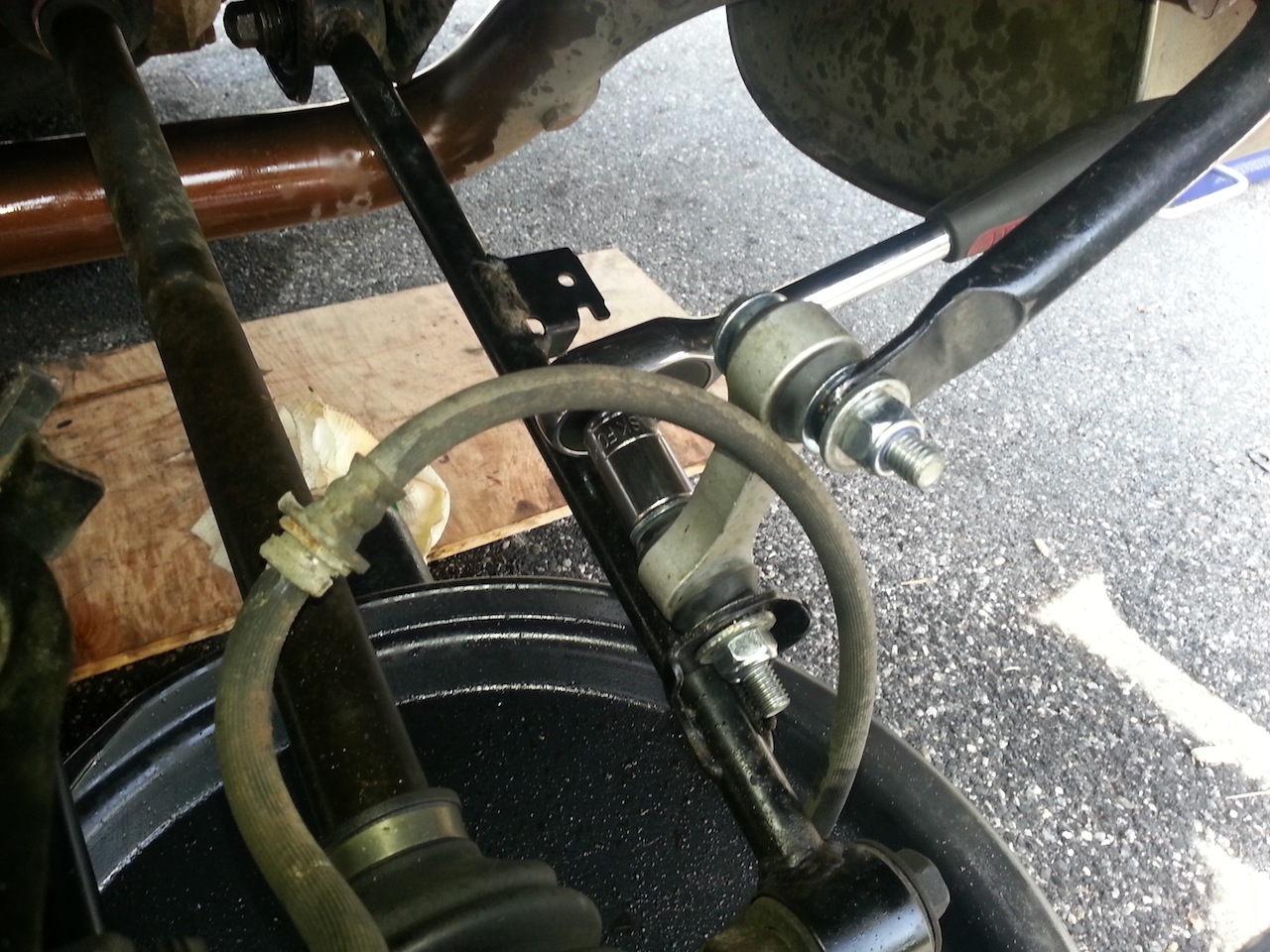 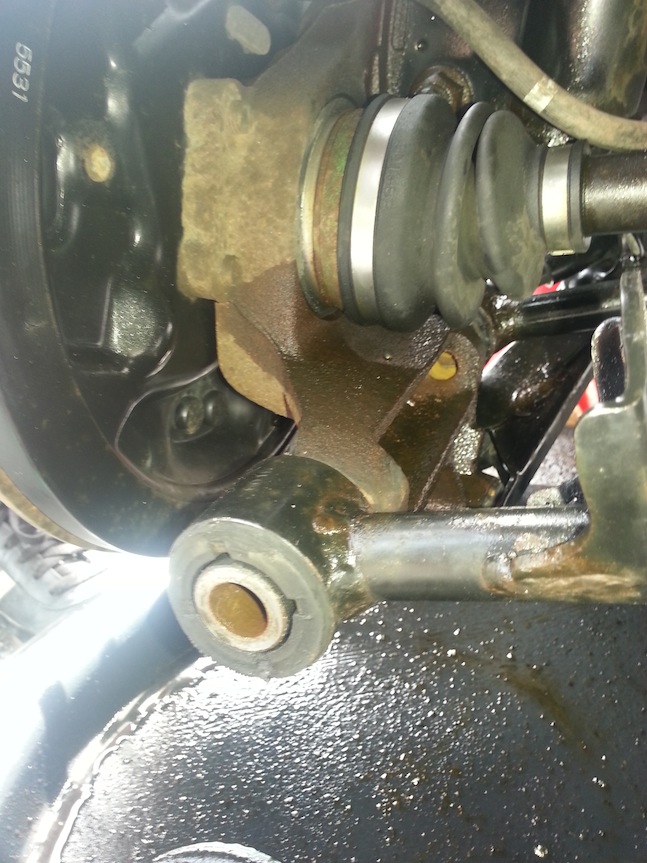 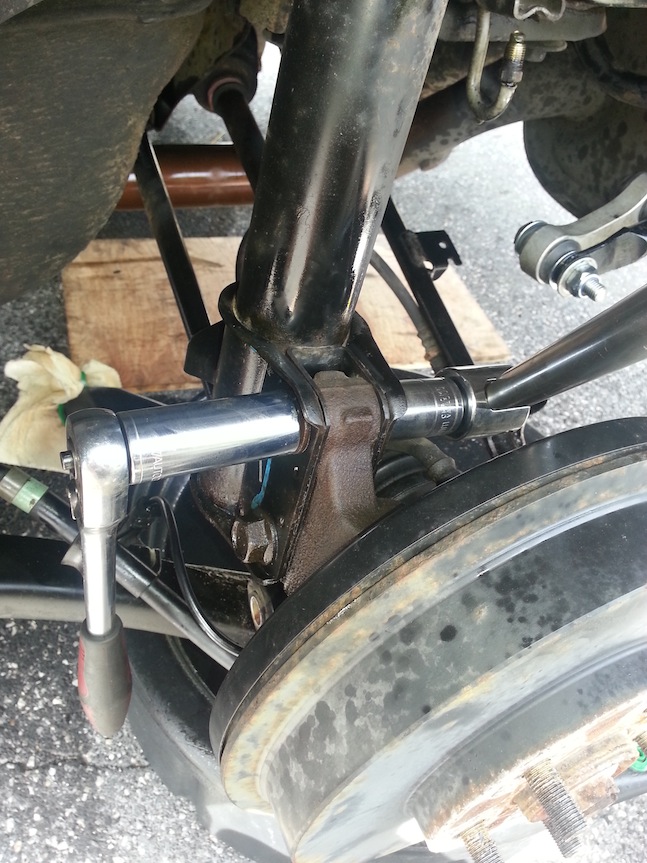 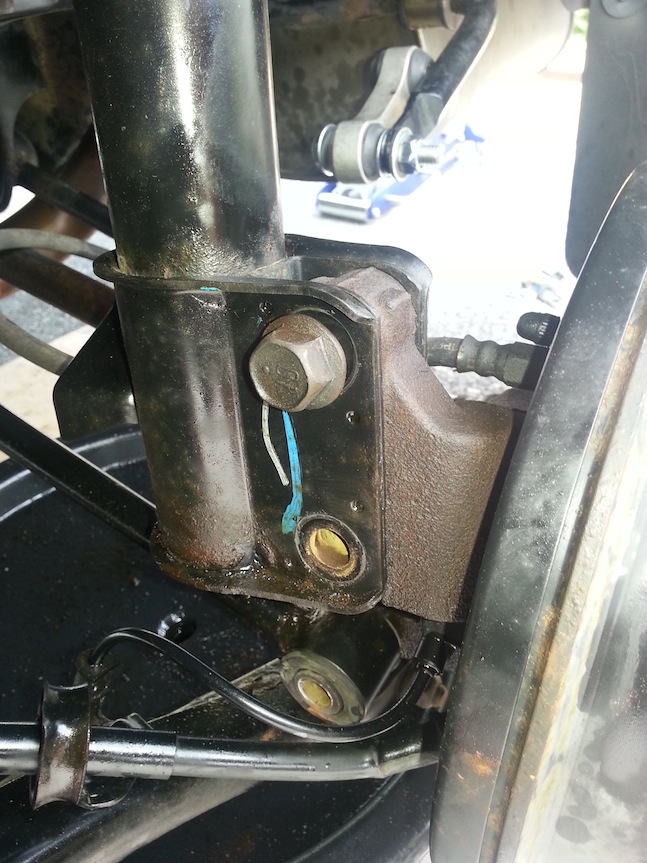 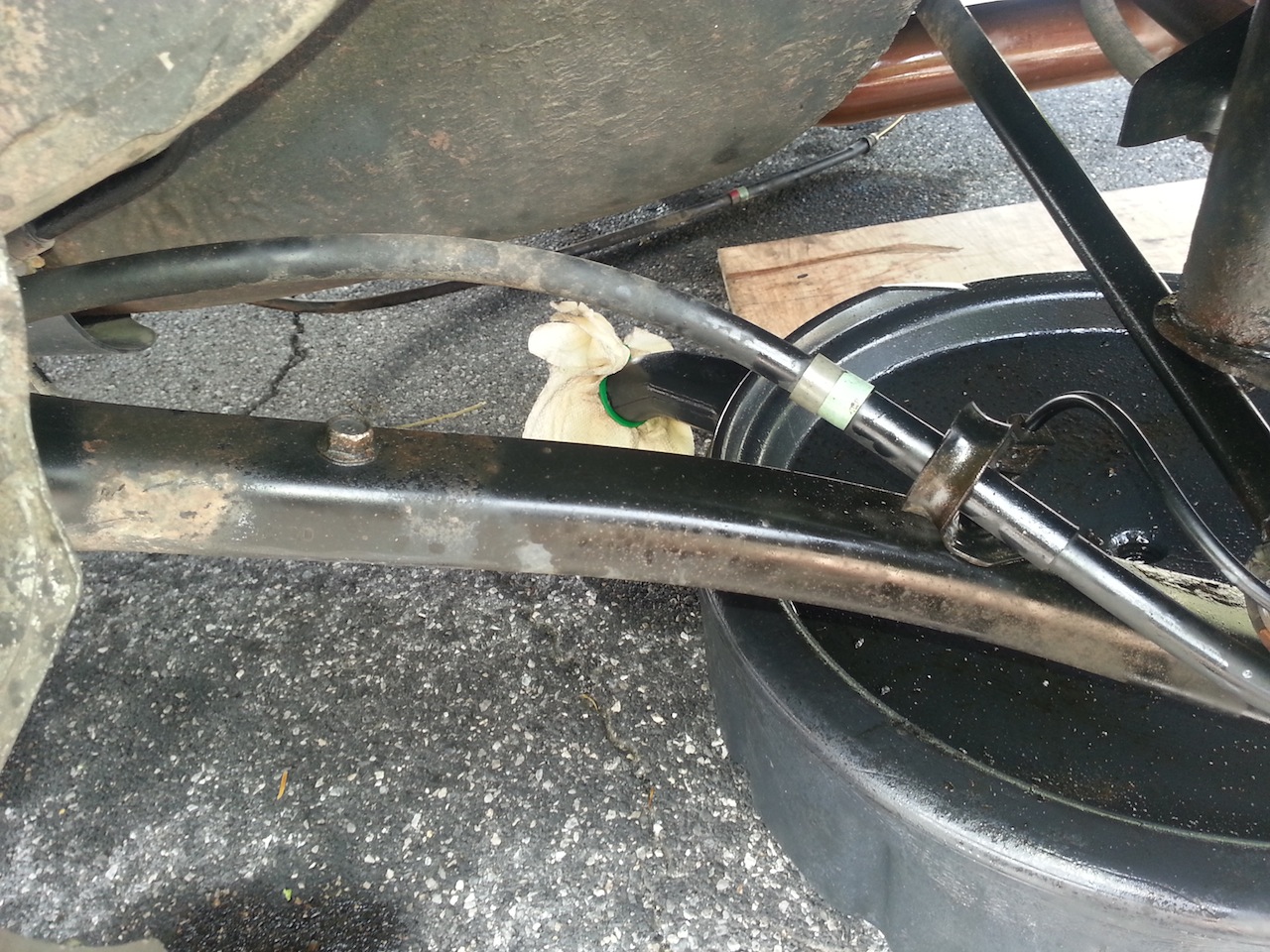 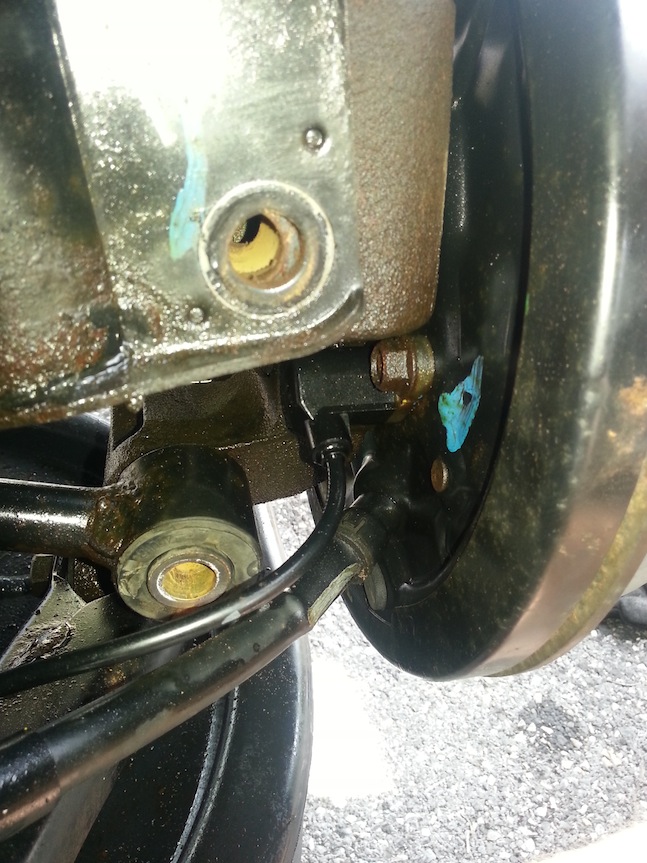 Alternative Note: If you do not have a new trailing arm to swap in, remove the trailing arm from the knuckle using what I presume is a 19mm socket combo (not verified) 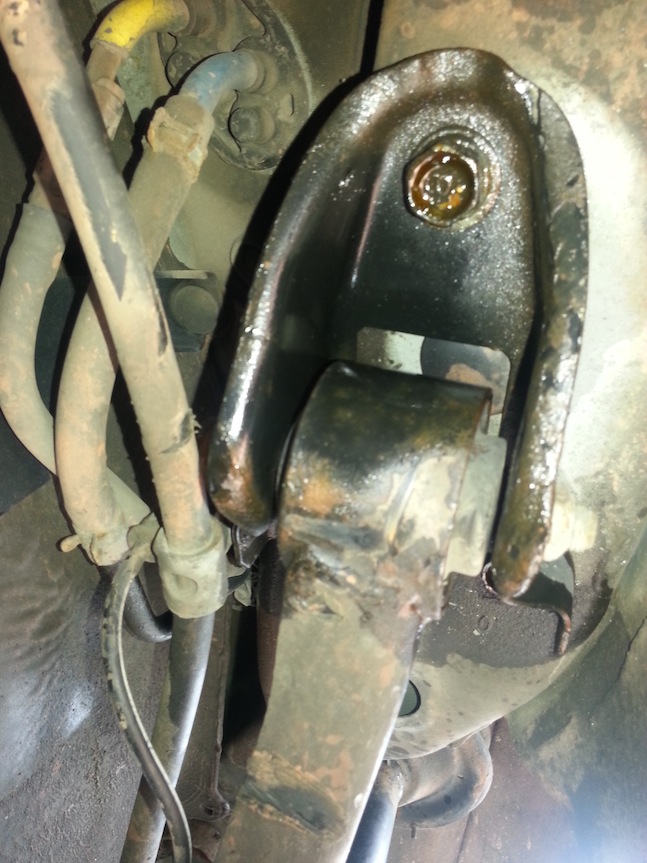 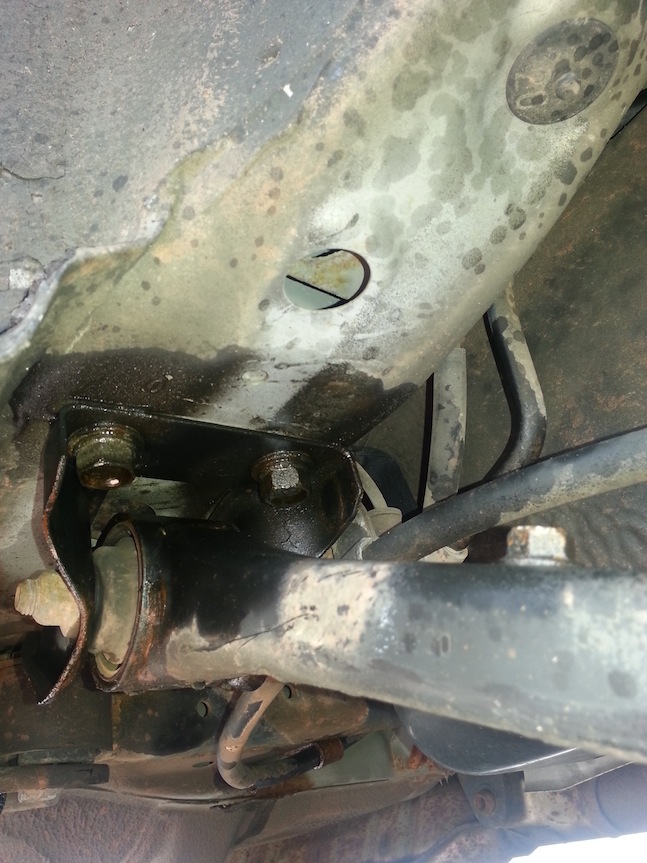 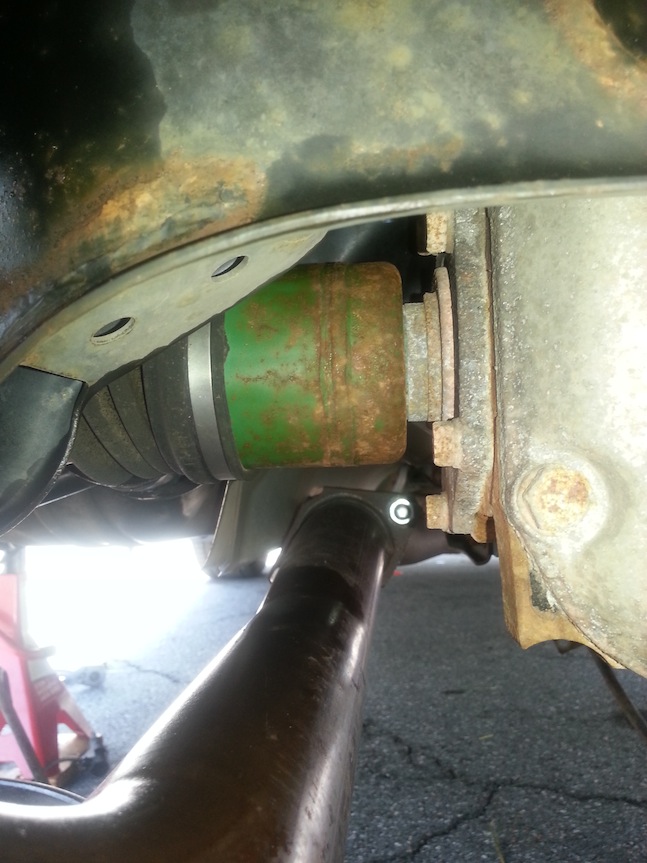 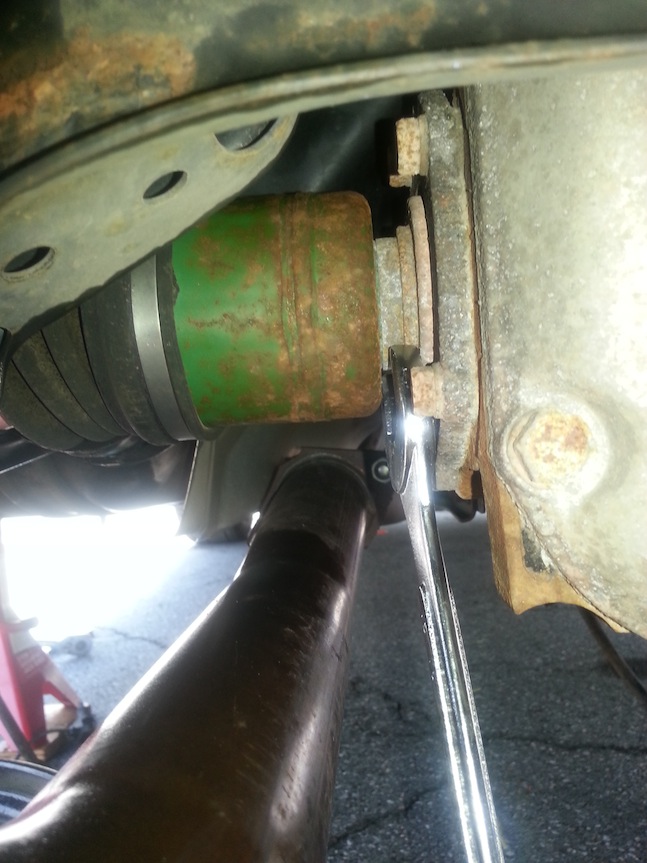 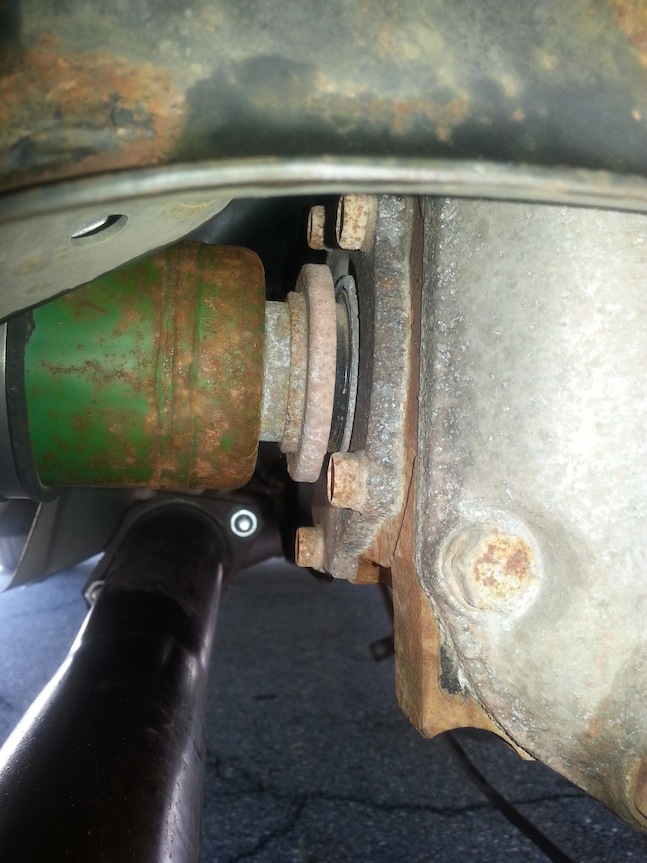 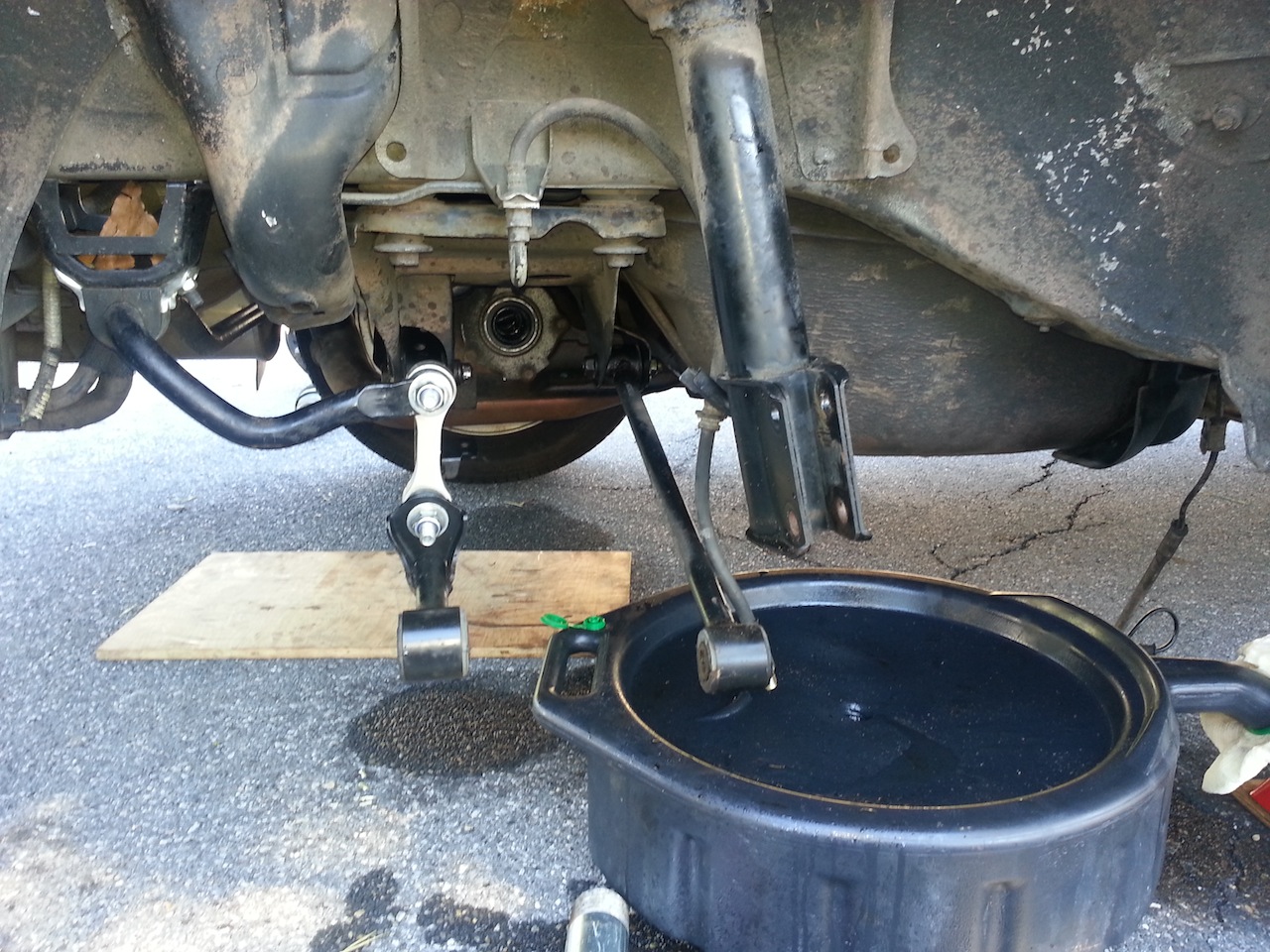 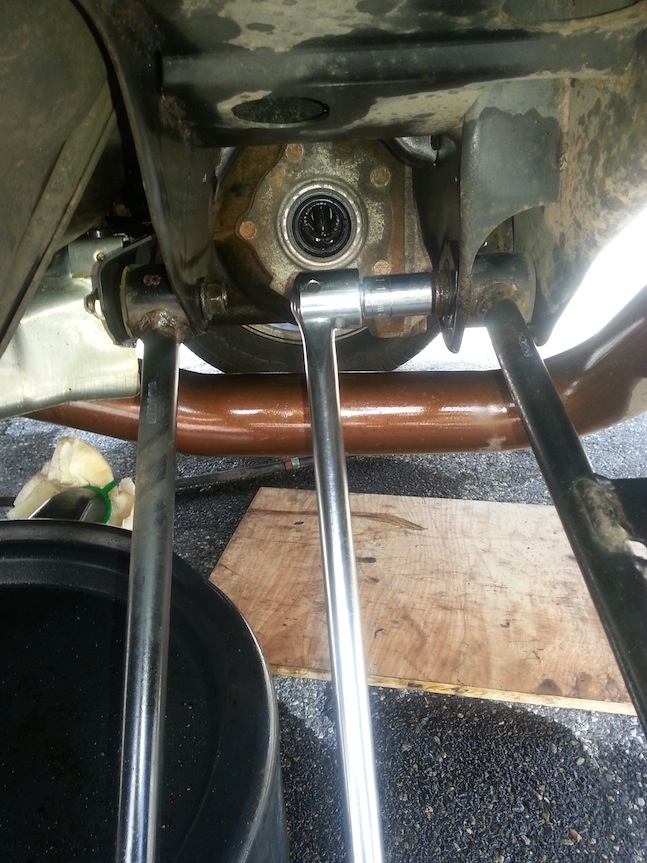 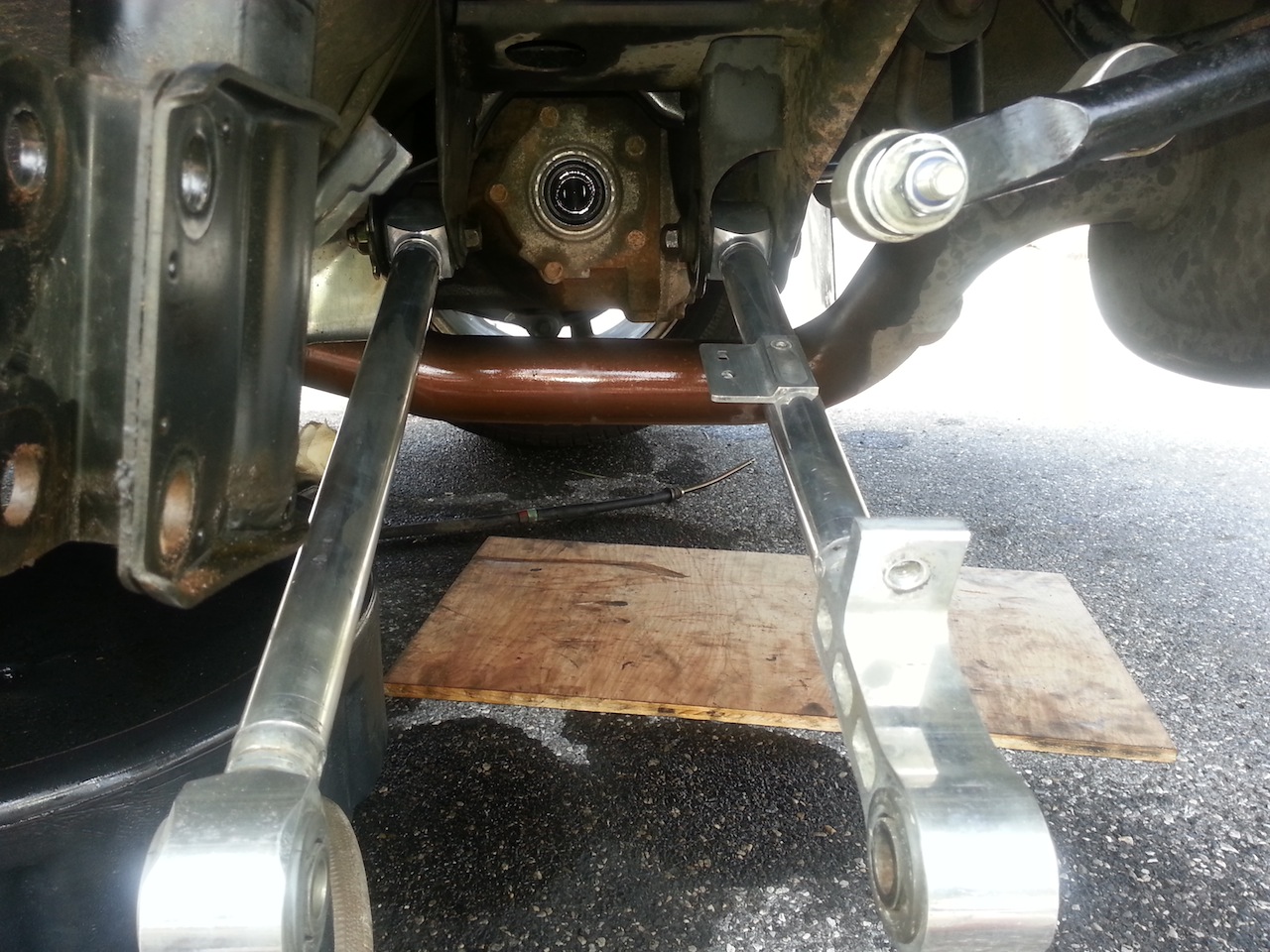 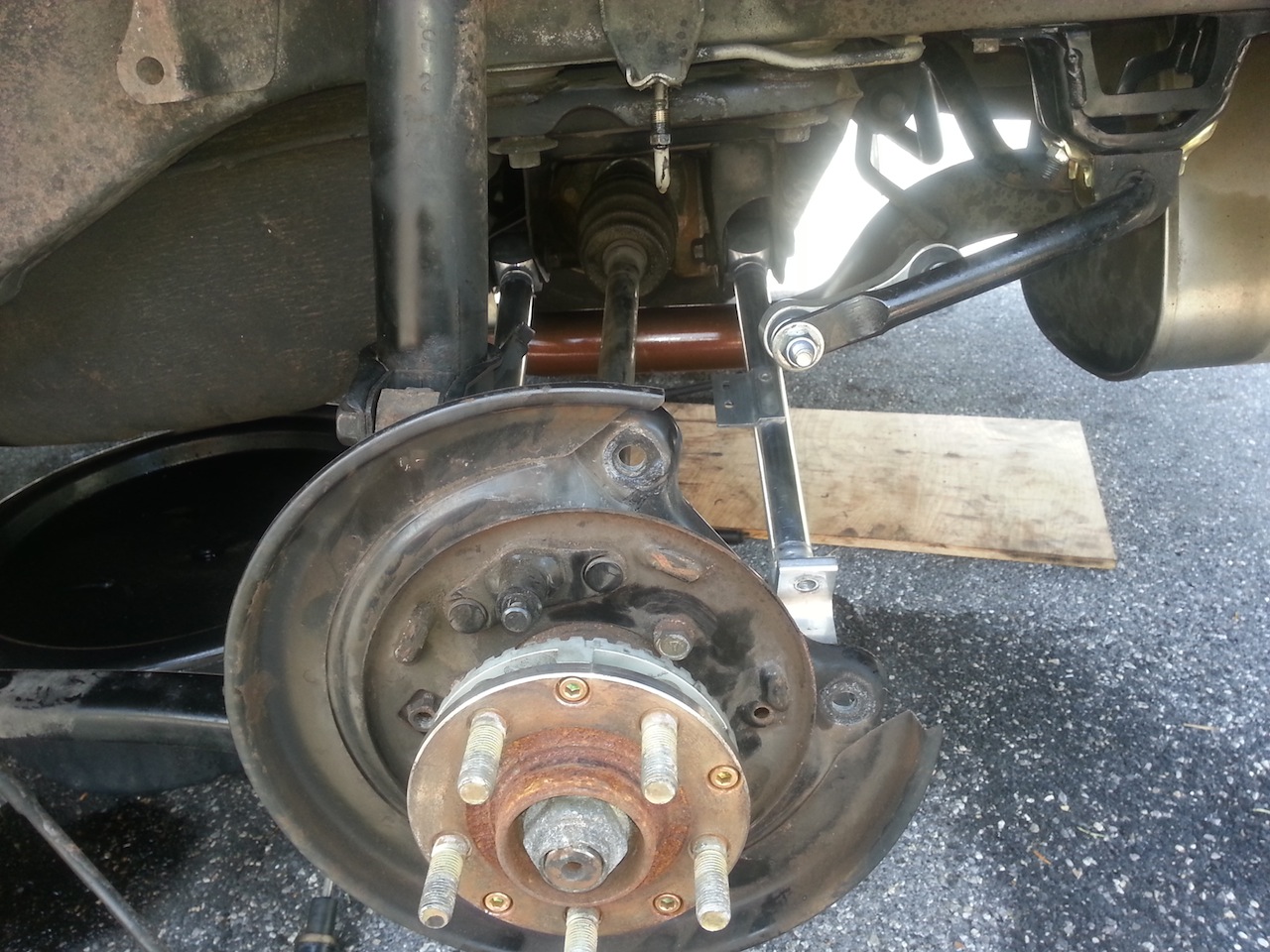 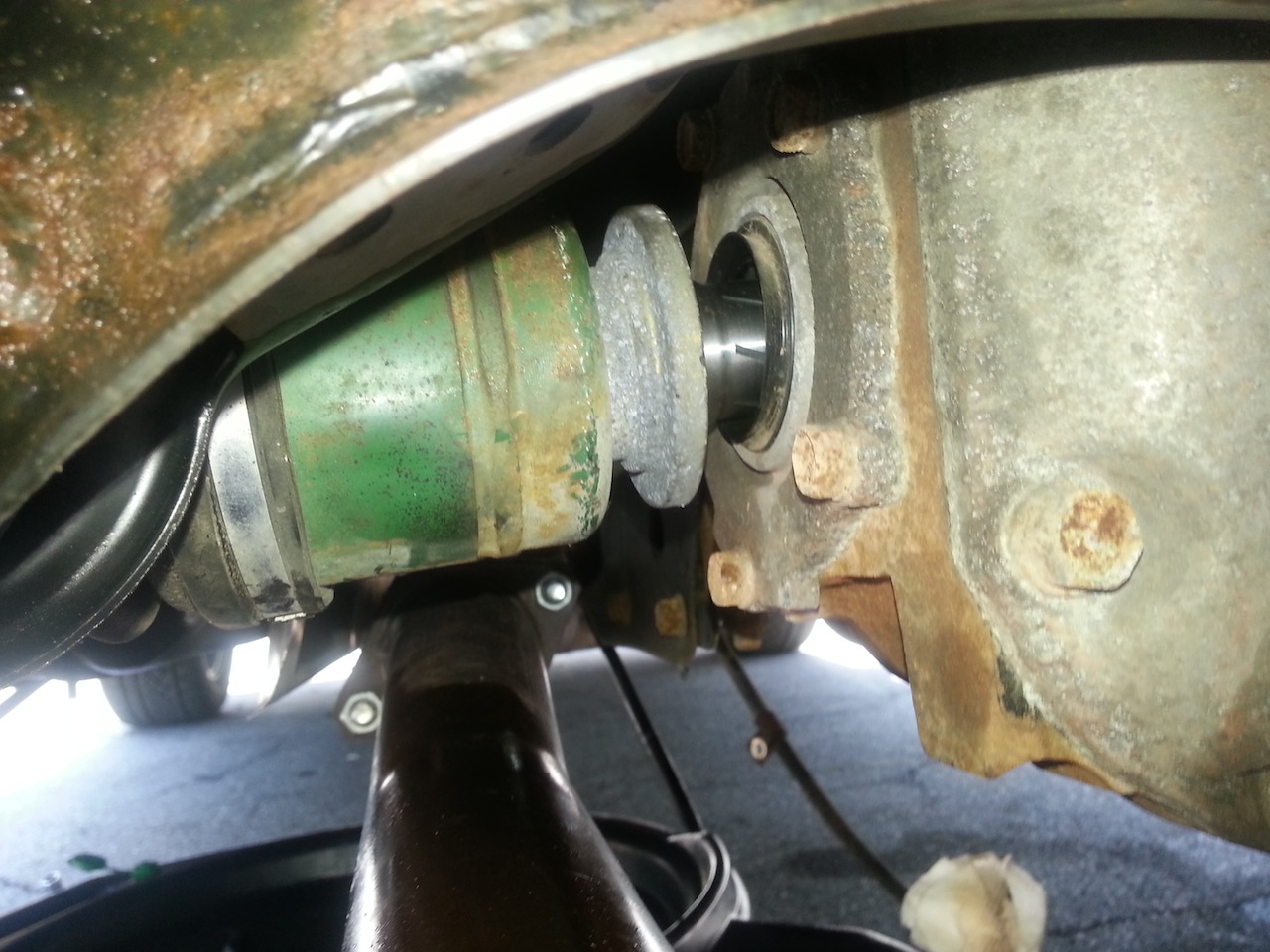 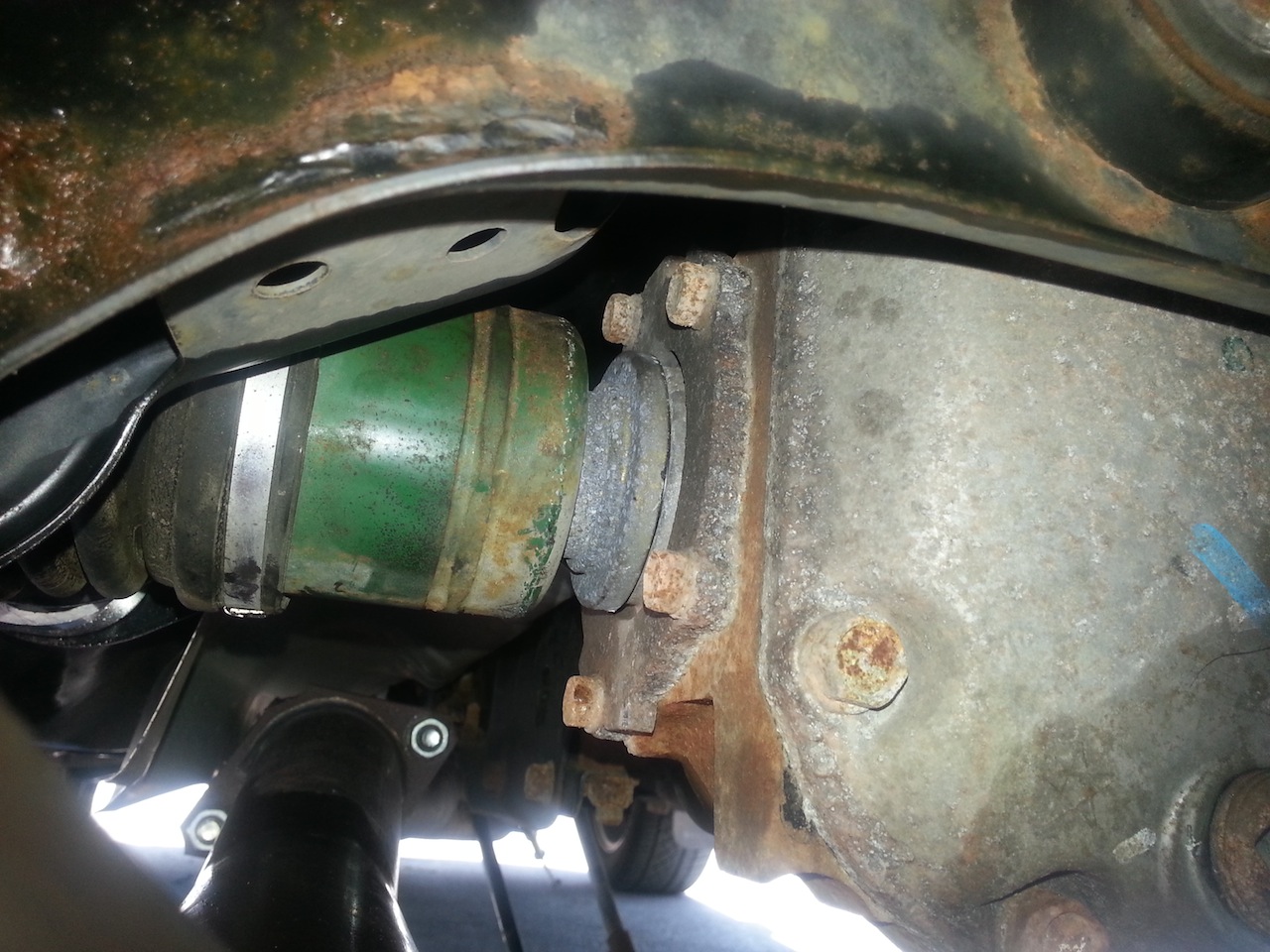 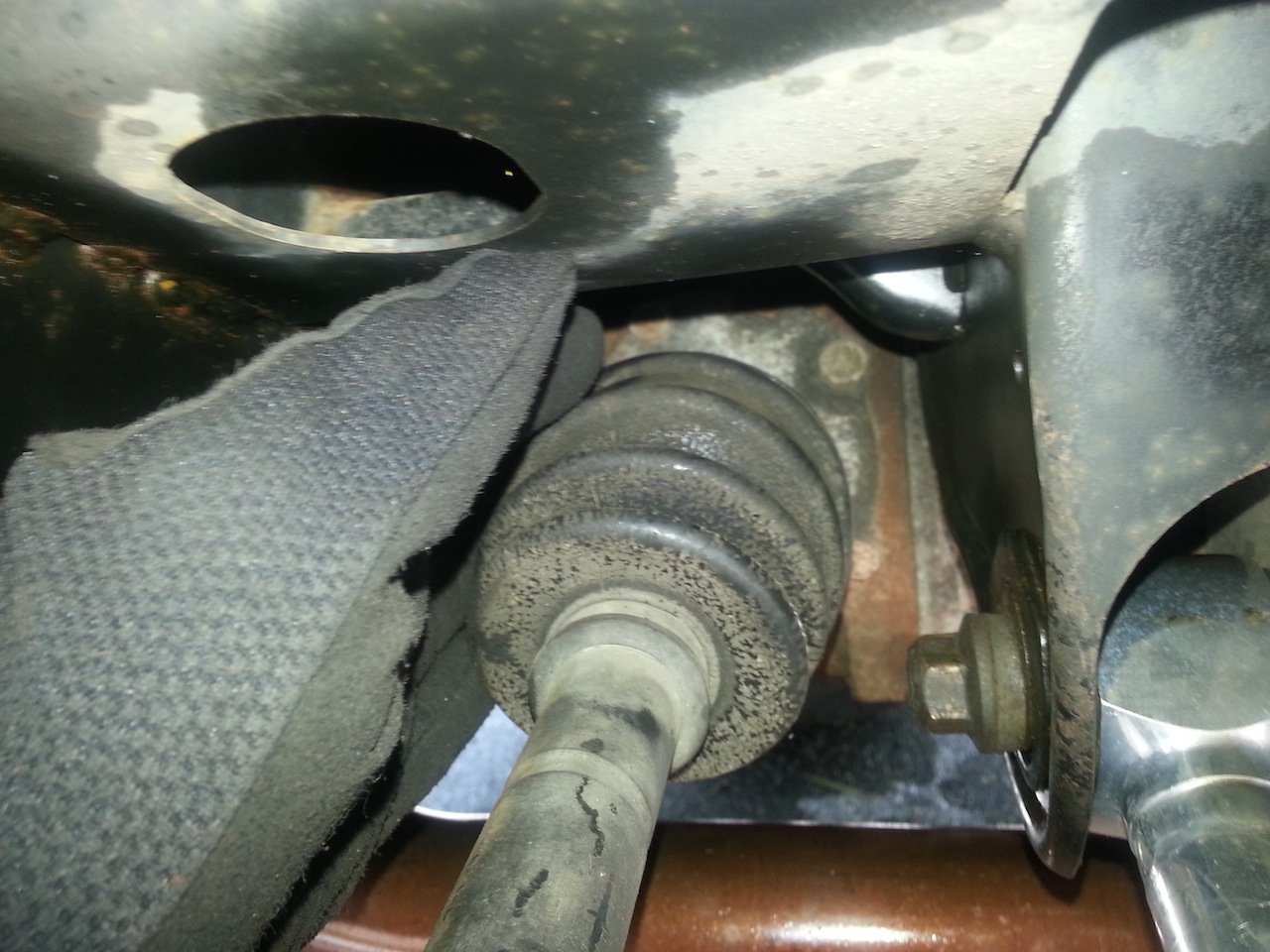 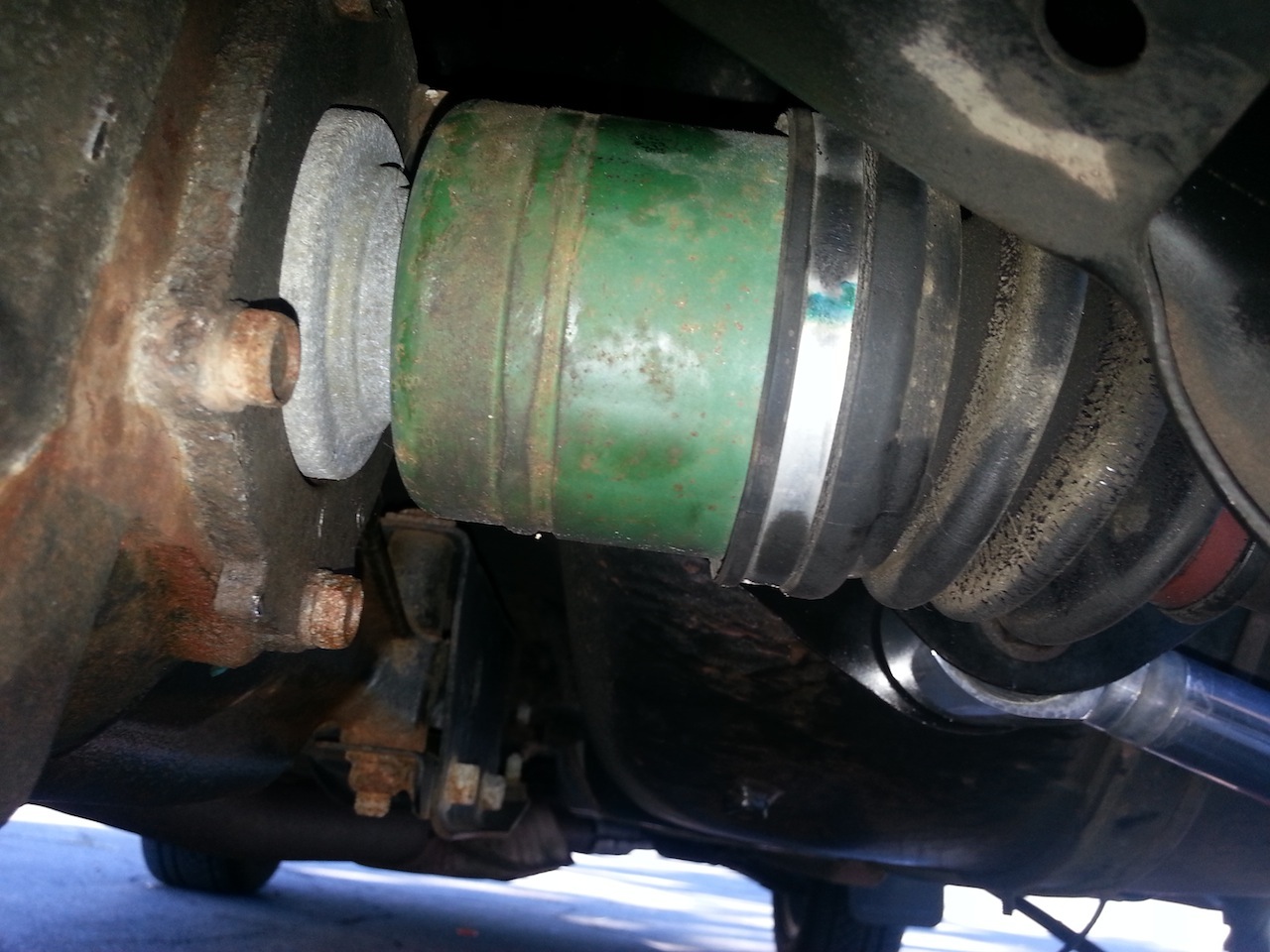 Alternative Note: Reattach the trailing arm to the new knuckle

Note: My e-brake came completely disassembled, so I had to reconstruct the e-brake at this point. I used this and this to reassemble my parking/e-brake 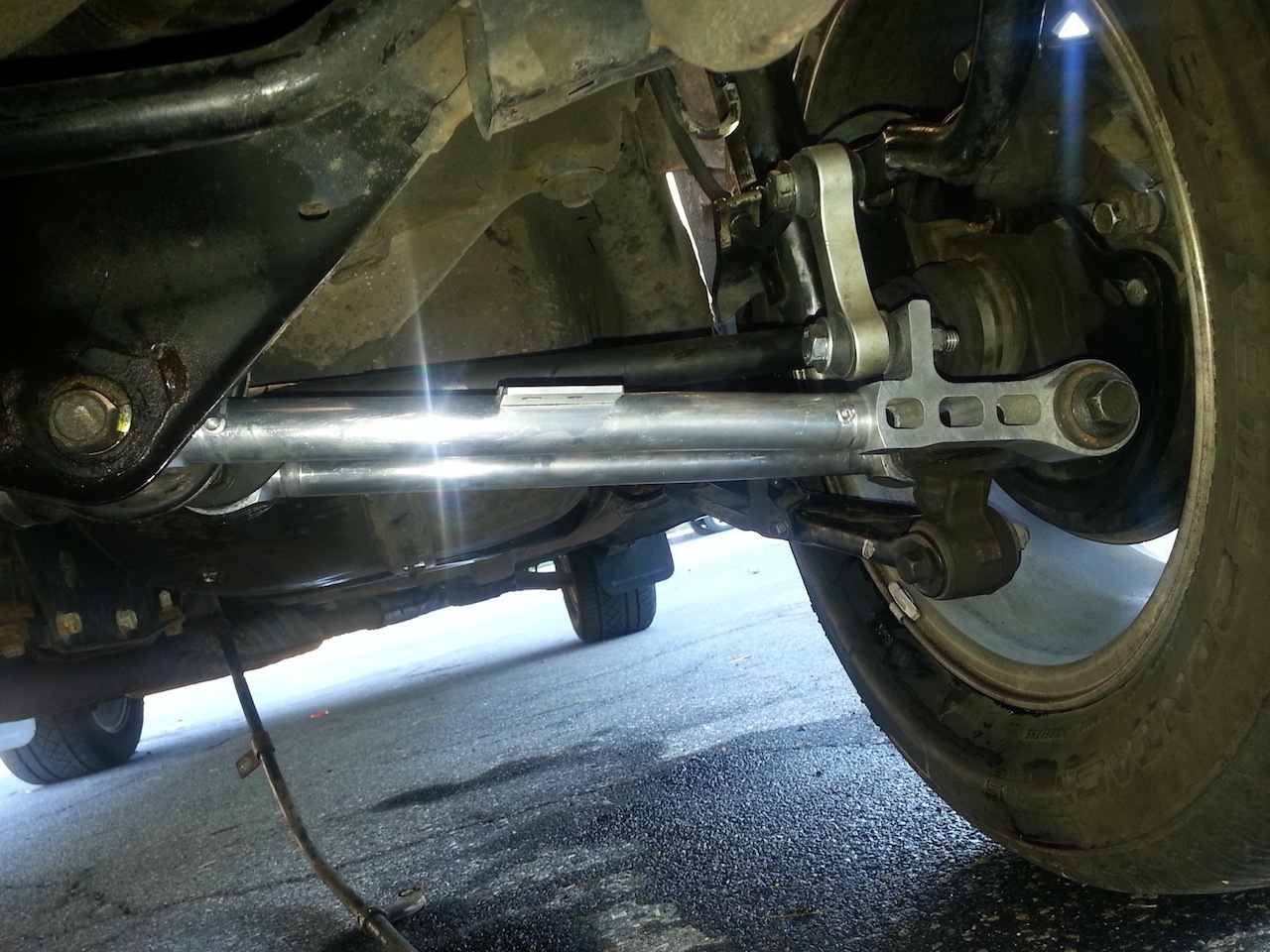 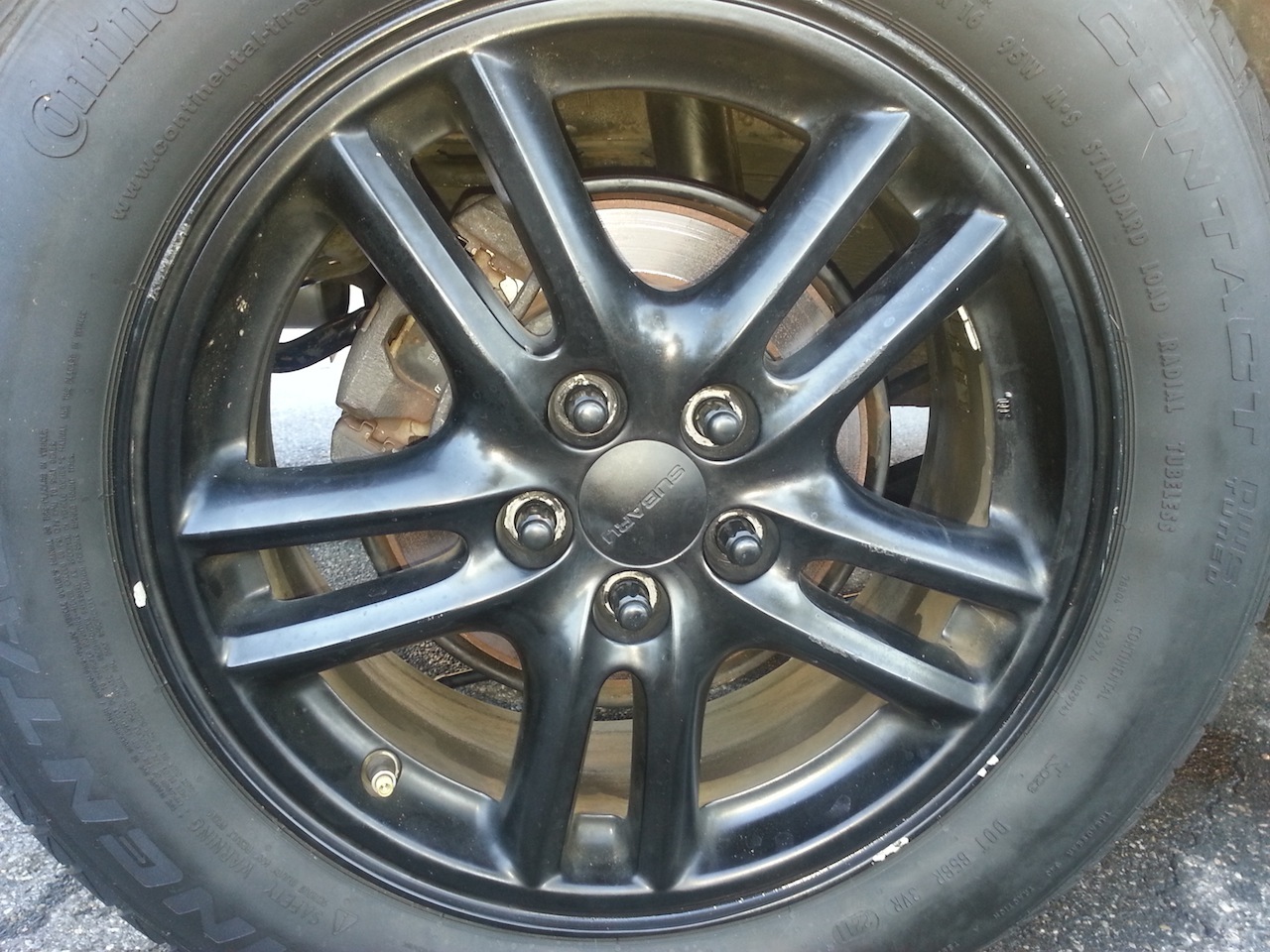 Now repeat for the opposite side.